The Economic Effects of Climate Change and How to Mitigate Them

Climate change mitigation refers to the subfield of climate change economics concerned with measures taken to reduce the rate and severity of future climate change. The following are possible means of reduction:

First, the subsidization of fossil fuels must end.

A large number of nations provide massive subsidies to the fossil fuel industry. Without new taxes, studies show that removing sector-level trade barriers and subsidies will boost productivity and diminish environmental impacts. If these subsidies were eliminated, there would be a significant drop in greenhouse gas emissions and an increase in renewable energy jobs.

Removing subsidies for fossil fuels would have varying consequences, depending on the subsidy eliminated and the cost and accessibility of other energy sources. There's also the problem of carbon leakage, which occurs when an energy-intensive company loses government support but moves its operations to a nation with fewer environmental protections, leading to an overall increase in world emissions. 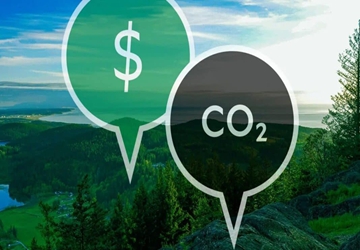 A "carbon pricing" system assigns a monetary value to this pollutant to reduce carbon emissions. Emission trading, outcome-based climate finance, crediting schemes, and many others are all viable options for determining costs. In addition, carbon taxes would allow governments to tax greenhouse gas emissions which is another way that carbon pricing can help the government by bringing in more money.

Governments can utilize the cost of greenhouse gas emissions to determine their corporate tax rates. Carbon taxes are particularly beneficial since, once established, they can help the government financially, reduce greenhouse gas emissions, or do both. A near-universal understanding exists that carbon taxation is the most efficient means of producing a sizable and prompt reaction to carbon emissions and climate change with the least economic outlay. However, the tax has been met with opposition due to concerns that it is regressive, hurting the poor more than anybody else because they spend a larger share of their money on energy. Despite the near-unanimous support, numerous issues concerning collecting and transferring taxes remain unclear. How the recently amassed tax revenue will be dispersed is an important issue that has been raised.

A carbon tax's revenue, in whole or part, can be put toward alleviating poverty.

Transformations in the market's underlying architecture

Some countries in the 90s realized the potential impact of market-oriented reforms on energy consumption, energy efficiency, and greenhouse gas emissions.

Governments can utilize market-based techniques to reduce emissions in addition to command-and-control legislation (like a carbon tax). Emissions trading is one strategy for reducing greenhouse gas emissions by limiting the amount of pollution that can be produced. Under this system, governments cap the pollution produced by all polluters and then issue permits, either by allocation or auction, to entities that allow them to produce a certain amount of carbon dioxide equivalent emissions. In an emissions-trading system, an organization's ability to pollute is constrained by the licenses it holds to rephrase. As a result, polluters can only raise emissions after getting permits from sellers. Many financial experts favor this approach since it is market-based and inexpensive.

Opening up the energy market to competition

Several nations including the United States, the European Union, Latin America, and Africa, have liberalized and restructured their energy markets. Even though these regulations were drafted to boost market competition, they could majorly affect emissions. Emissions prices could be more effectively signaled to the market if reforms are implemented.