Europe's Ukrainian refugee crisis: What we know so far

Compared to 2015-2016, the EU registered far more refugees from Ukraine. What happens to the newcomers; what can be done for non-Ukrainians trying to flee the war, and what does this mean for the EU's mid-term refugee policy? Here's what we know

1. One million refugees are expected to enter the EU this week.

As of February 27, 370,000 Ukrainians, EU citizens and third-country nationals had travelled to neighbouring EU countries, where temperatures are typically below zero:

A total of 500,000 people had fled Ukraine as of last Monday, and the UN refugee agency estimates the violence could displace as many as 4-5 million people. 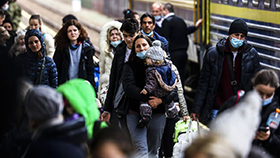 Women, children and foreigners formed the first group, while adult Ukrainian men were drafted into the army. Exit restrictions on the Ukrainian side and congestion on bad roads were some of the first signs of the crisis. On the EU side, the longest wait times are in Poland (up to 80 hours) and the shortest in Hungary (1 hour). Local officials in Ukraine began easing lockdown restrictions over the weekend, and traffic in some areas is now two-way as Ukrainian migrants return to the battlefield.

Before the war, Poland and Romania had established basic housing for 1 million people each, Hungary 600,000 and Slovakia 50,000. This limit is likely to be exceeded soon. Without a doubt, this issue is the biggest logistical nightmare the Eastern states have faced in the modern era, and they seem to be handling it just fine. The national army will be mobilized to support the influx of refugees, and a network of temporary reception centers will be established on the EU-Ukrainian border. So far, only Slovakia has asked the EU border protection agency Frontex for support in border management.

Each country has indicated that it will implement an open border policy. Poland's interior minister, Marius Kaminski, claimed that the country would "take in as many people as our borders". Isolation procedures and Covid-19 vaccination verification for arriving refugees are waived.

3. The vast majority will not be “asylum seekers in camps”.

Ukrainians can visit the Schengen countries without a visa and can stay up to 90 days without a visa. The EU approved visa liberalisation in 2017, the first time a visa-free country bordering the EU is at war at the same time.

Last week Hungary and Slovakia announced that Ukrainians would be granted "temporary protected status" by the state. On the other hand, many new arrivals are unlikely to seek refugee status. In Slovakia, for example, fewer than 50 people applied for asylum.

4. On Thursday, EU countries should temporarily grant EU protected status, such as access to the labour market.

Interior ministers from across the European Union met on Thursday to vote on a package of crisis response measures, including a repurposing of some 200 million euros for emergency border management aid. (Substantial funding will be mobilized in the coming weeks.) The EU's integrated political crisis response structure deployed in the 2015-2016 migration and Covid crisis has established a Crisis Management Partnership (IPCR). The IPCR brings together national officials and EU institutions to share data on arrivals and hotspots to identify gaps and urgent needs. 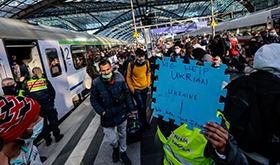 Unlike in 2015, Europeans warmly welcomed war refugees from Ukraine's neighbors and are doing a lot to help the newcomers. Ukrainians have important linguistic and historical ties with their potential host countries. There is no doubt that they are the innocent and ignorant victims of an unjustified conflict in which many have paid a heavy price for their desire for stronger ties with Europe.

On the other hand, every refugee crisis has followed a predictable path, from a warm welcome to a sense of exasperation at earlier obstacles, to fears of rising numbers and perceptions of open borders and the vulnerability of host countries to exploitation. In a time of high inflation and high security concerns, the local community is clearly going to have some difficulties. However, these are likely to be manageable.