The Conflict between Russia and Ukraine Explained

Ukraine was an important part of the Soviet Union until 1991; when it decided to declare independence, it was seen as the beginning of the end of the once-mighty superpower.

After the disintegration of the Soviet Union, NATO expanded its sphere of influence eastward, bringing into its camp the vast majority of Eastern European countries that had previously been part of the communist sphere of influence. Estonia, Lithuania and Latvia are all part of the Soviet Union and joined NATO in 2004. When NATO announced its intention to annex Ukraine, it crossed a big red line for the Russians.

That was the position Vladimir Putin expressed in a televised speech on Thursday, when he claimed Ukraine's desire to join NATO was an "hostile act" and that NATO expansion was an existential threat to Russia.

Putin has previously said in speeches and interviews that Ukraine is culturally, politically and linguistically part of Russia, a view supported by the Russian government.

Historically, the nationalist Ukrainian-speaking population of western Ukraine is more inclined to have closer ties to Europe than the Russian-speaking majority of the eastern half of Ukraine. 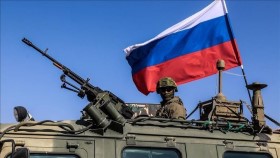 A pro-Russian president was forced to resign in early 2014 amid massive protests in Ukraine's capital Kyiv, known as Euromaidan, after refusing to sign the EU's alliance agreement. Russia responded by simultaneously annexing Ukraine's Crimean peninsula, fomenting a separatist rebellion in eastern Ukraine, and eventually taking control of parts of the Donbas region of eastern Ukraine. The two sides agreed to a ceasefire in 2015, but the peace has not been maintained and the battle lines have hardly changed since then. According to the Ukrainian government, some 14,000 people were killed in the violence and another 1.5 million had to flee their homes in the country.

These methods have become increasingly aggressive in recent months, with the U.S. State Department claiming in early February that Putin was planning a false flag operation to create a "pretext for invasion." In fact, Putin's attempt to pull Ukraine back into Russian territory has met with backlash, and many recent polls show that many Ukrainians now want to be members of a transatlantic military alliance.

What does Putin hope to achieve? 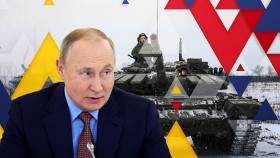 Putin first referred to Russians and Ukrainians as "one people" in an article written in July 2021, suggesting Ukraine had been "corrupted" by the West and brought it out of Russia's sphere of influence through "enforced identification."

This form of historical revisionism was on full display when Putin announced on Monday his intention to recognize the Luhansk and Donetsk People's Republics while challenging Ukraine's sovereignty.

Over the past three decades, Ukrainians have not embraced the idea that they are nothing more than puppets of the West, but have resisted this view by seeking closer ties with Western institutions such as NATO and the European Union.

Russia has since been accused of waging a hybrid war against Ukraine by launching cyberattacks, exerting economic pressure on the country and spreading differences through other media.

In December, Vladimir Putin sent a list of security requests to the United States and NATO. Chief among them is the promise that Ukraine will never join NATO and that the group will drastically reduce its military presence in Eastern and Central Europe — an idea the United States and its allies have repeatedly asserted is not a good idea.